The Reflections of a Bookstore Cat

Hello to all my cat, and book, lovers once again. I've had a very enlightening week since last we talked and have discovered something I feel the need to tell you. I was minding my own business over the weekend, wandering around my house and looking for something to pass the time when out of nowhere this floppy worm appeared on the floor in front of me.

Now, let me tell you, there is nothing that gets my whiskers in a bunch more than an entitled worm.
And this one was especially bold, just laying there begging me to show him who's boss. So that's exactly what I did, I took him to back to my chair and gave him the ol' Henry treatment


This led to, what I believed to be, jealousy from my roomie Dickens. However, when I offered him a little alone time with wormy this was the look I received

I usually don't spend more than a minute or two swatting my prey around but this guy wouldn't let up.
I would chew on him for a bit and this stubborn thing would just start wiggling around again. I must have worked on him for over 5 minutes (which is like an hour or two in human time I think). I began to think that this worm was some sort of super worm, and then I realized that I was the rube.
This whole time I thought the worm was here to torment me, it turned out it was just using me to get to the humans that live here. How did I come to this conclusion? Simple, I looked up. I looked up and there was that guy with the beard trying to strangle that worm from the other end, and having about as much luck as I was.

Finally, he took it and kept it captured by placing it through some hole restraints that were on his foot. He then wrapped that worm up in a niffty little knot so it would never escape again.

Now here is the really weird thing, the thing I feel the need to tell you. I've noticed that it's not just my human that captures worms and jails them to their feet, it's all of them. 9 out of 10 humans that I see through out the day, are wearing these worms on their feet. I'm not saying that I have empathy for these guys, but just put them out of their misery and don't walk around with these macabre trophies attached to your feet. Not only is it kind of cruel, but it drives ME crazy. I mean I am a cat, so it's in my nature to attack things that wiggle and squirm, be them attached at the foot or not.

So I suppose the point I'm trying to make is that there's more than one way to look at things.
If you're scratching your furry head and can't come up with a solution to a problem you're having,
try looking up. Or over. Or down. Or just leave it alone for a bit and come back to it. There may be an answer that you just had not looked for yet. Or may be there is some crazy bearded guy dangling worms above your head and having the same problems as you. All you have to do is look up once in awhile. You never know what your missing.

See ya next time,
Henry

Posted by vintage-books.net at 2:49 PM No comments:

The Reflections of a Bookstore Cat

I have an idea. Let's say you have a favorite store, like a book store, that you love to go visit because they have a great selection of books but also because one of the most handsome creatures on this here green earth resides there. Well I've decided, that if the main draw for that bookstore is ME

then maybe the store should be called:

and then maybe  in little letters we can put:

and we sell books!!!

if there is enough room.  I know that there are a lot of book lovers out there, maybe almost as many of them as cat lovers, but I've got to believe that more people are searching for Henry on their GPS or google or whatever people use to find me. So I'm going to leave the bosses a post-it 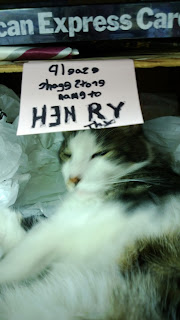 We'll see if those humans get the hint. In the meantime here's the latest in the bookstore news:

I've been told that its primary color is red, but all I see is a grayish purple. Those humans must be colorblind.


Also, because I've been known to be such a hip cat, a beatnik if you will, they've set me up my own table full of some of my favorite beat generation authors. I'm hoping I have enough time to finish reading them all before they get purchased by some hipster..... 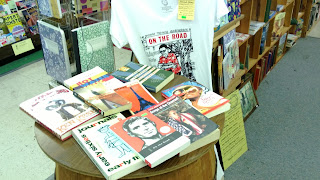 And Dickens just told me that he's too cute not to be in at least one picture on my blog, so whatever. Since I have to live with him I might as well keep him happy. Here is your obligatory Dickens centerfold:
And that's all this week. Again thanks for reading and please come in to visit when you have a chance. If I'm not too busy, I'll come out and say hello. For now I'm off to my bag of bags for a well deserved cat nap. 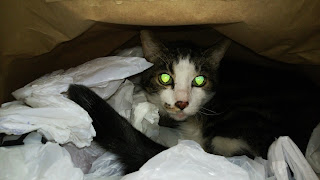 p.s. Dickens doesn't know I'm posting this pic, but here is what he usually looks like

Posted by vintage-books.net at 2:12 PM No comments:

A Day in the Life of a Bookstore Cat

So I've decided that I need to expand my horizons. Like any 21st century bookstore cat would do, I'm starting a blog. I see a lot here at Vintage Books, I've spent quite a bit of time perusing the shelves and boning up on my vocabulary, so I think I'm ready. I mean it's great being the book store cat, don't get me wrong. I rule this place. It was so nice of my humans to build me my own shelter and then fill it with books for me. They come everyday to hang out with me and pet me and give their thanks that I'm such a kind and generous cat. I've got huge bay windows so I can see all the things that are going on out there in the real world. 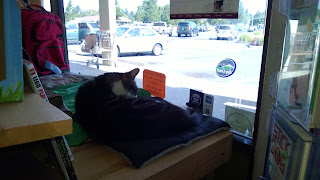 I have a buddy who isn't quite as social, but when the lights go out he really does know how to cut loose.


I've got a couple of humans that are o.k., they pick me up and move me around a bunch. They also fill up my food and water bowls, so no complaints really.

My home is pretty great

It's a little early to mention anything of note yet, I've had a couple of people come in and visit, but I'm really hoping for that perfect storm of a long line at the counter and me parked right by the door so they can all pay their respects as they walk in and out. If anything of interest happens I'll let you know. For now I'm going to lay down in the corner with this guy.... 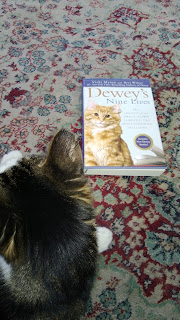 Talk to you soon,

Henry
Posted by vintage-books.net at 12:47 PM No comments: