I've been back from my summer studying in Paris for about two weeks now, & I'm finally getting caught up enough to sit long enough to write about how I spent the past three months. 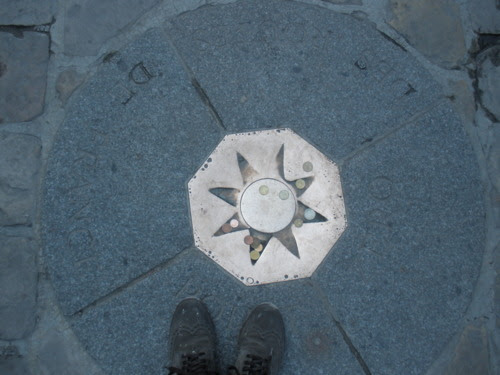 Kilometer Zero, the very center of Paris--& my lime-splattered boots, courtesy of the Catacombs.


I went to Paris (officially) to study language at the Sorbonne--I study English literature up at WSU-Vancouver, but I was ready for a change of pace & a change of scenery; anyway, how could I miss an opportunity to spend a summer in Paris? 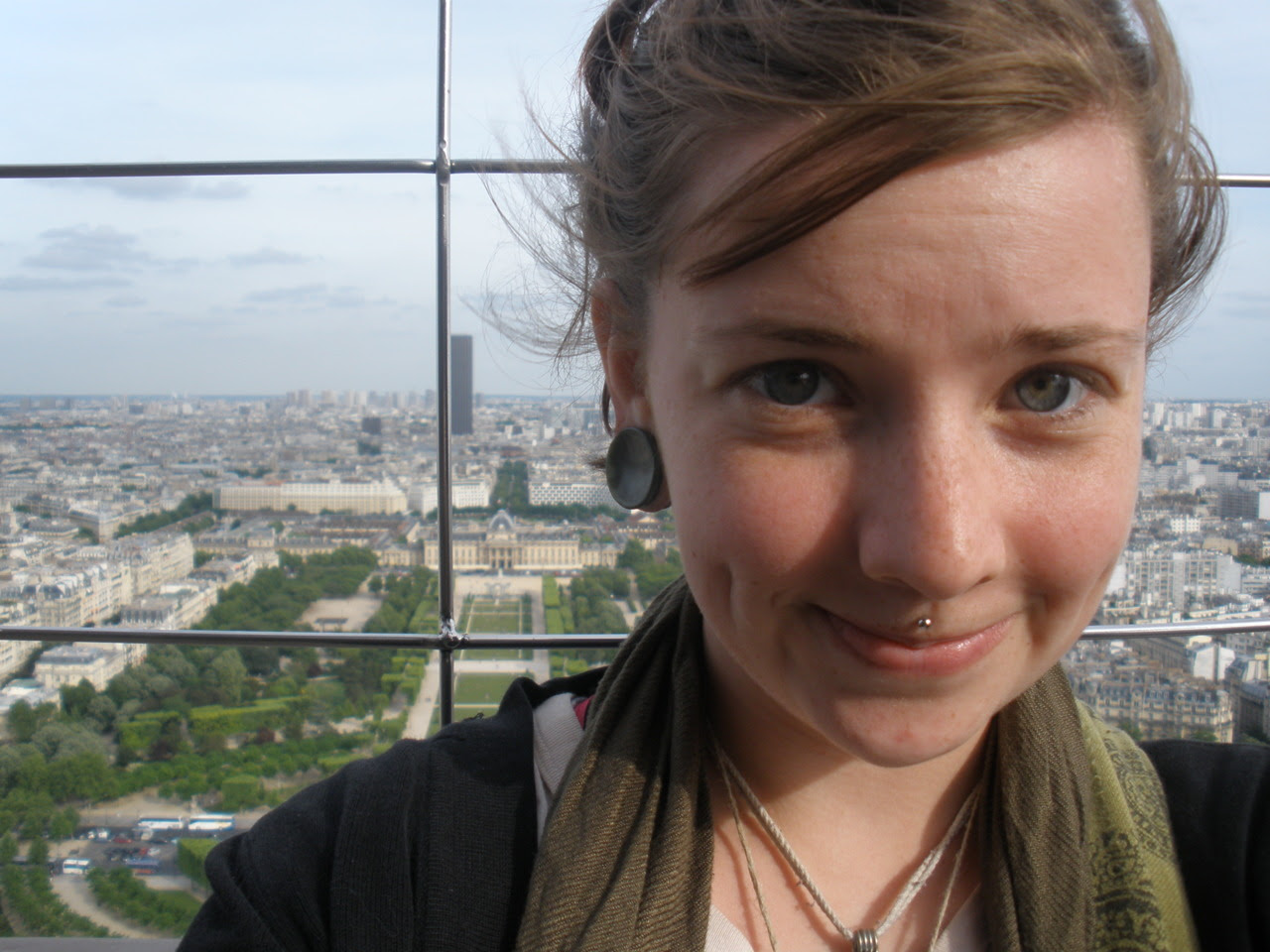 On the second floor of the Eiffel Tower

My course load was relatively light (2 hours of grammar & 1 hour of phonetics, 5 days a week), so I had lots of time for wandering, searching out the city's little nooks (St. Paul's was my favorite accidental-discovery), sipping tiny cups of coffee, & whatever else I might find myself doing. As it was, I often found myself wandering into the center of the city, walking along the Seine, watching the pigeons & gulls darting around the towers of Notre Dame, & eventually (inevitably) ducking into the English-speaking bookshop on  Rue de la Bûcherie, Shakespeare & Company. There, I could always find a cozy little spot where I could sit unbothered for hours, wrapped up in whatever my book-of-the-moment was. At least one evening a week, I would join the crowd gathered out front of the shop & overflowing into the little-used cobblestone street to listen to the various writers who came through & gave readings--some I was familiar with, & others this was the first time I'd heard of them, but they always had really interesting & often beautiful things to say about books, about poetry, about literature, & about writing in general. A few of my favorites were Eileen Myles, Lydia Davis, & Jennifer Egan. And, as if it couldn't get any better, the shop has a little black shopdog named Colette who likes to wander the crowd--I was really missing my dog most days, so I was always very happy to see her darting around all the people & visiting the cafe next door in hopes of scraps. 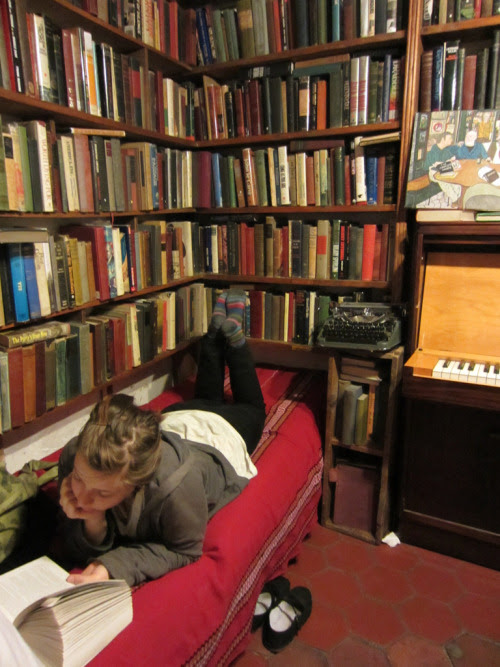 Despite all my reading of books in English (I had amassed a mini-library by the end of the summer, which has since been absorbed into my home library), I did pick up quite a bit of French & I'm hoping to get back into language courses next semester. I hadn't expected it initially, but once I started studying French, I began finding it relevant to the English literature I've studied, & I was even finding bits and pieces of it in the English books I was reading in Paris. It really made me start to think about language in a different way--it's far more complex that I had ever imagined (& still more).

I finished my courses at the Sorbonne on the first of August, packed up my backpack, & met my sister at the train station. I showed her some of Paris & after a couple of days we got on a train to Calais, then a ferry to Dover, then a bus to London. Not only was it a tremendous relief for my brain to be able to work in English again, but I somehow felt really at home in London--I walked through city parks & saw people meditating & going on flower walks; we ventured through Chinatown; we hit some of the high-end shopping districts (which are worth it even if you're on a 'baguette budget', if only to observe all the super-chic street fashion). I also got to visit Shakespeare's Globe Theater, 2 bookshops (Waterstone's & Hatchards), the TATE modern (including the Damien Hirst exhibit), the London Natural History Museum (I lucked out & got to walk through the Animal Inside Out exhibit, which is like Body Worlds except with animals), & of course several spots in the city that were used for the filming of Harry Potter.

We also went through Brussels (I knew the chocolate would be good, but I didn't think it would be that good), Amsterdam (I'm now harboring a dream of living out the rest my years on a houseboat in the canals--also: more bookshops, the names of which I couldn't pronounce but which still had a selection of books in English), Venice (very hot & very busy, but architecture like I've never seen before--forget the tours & big empty landmarks--just wandering the streets was a really nice way to spend the day, and there was a bookshop tucked in amongst the restaurants and souvenir shops), & Milan (only on accident).

We ended up back in Paris to catch our flight--& so that I could say goodbye to the city, & the bookshop, where I'd spent so many evenings curled up reading or writing & listening to the summer rain against the windows or someone playing the piano in the library. I was very sad to leave, but was also looking forward to getting back to my friends & family, to a place to sleep for more than a night at a time, & of course to my dog & cat. My first brush with European city life & culture was really amazing, though, & I can't wait for my next opportunity to explore further (Scotland & Ireland are next on my list!). But for right now, I'm back in my lit classes, & doing what I can to retain the French I picked up until I can get back into language courses next semester.

Should you find yourself in Paris, I absolutely recommend a trip to Shakespeare & Company, or Waterstone's in London, or (of course!) Vintage Books here in Vancouver. And if you want to talk European bookshops, Paris, or just in general, I'm here at the shop every Sunday, 10-4.


ps Shakespeare & Company has a very rich & interesting history which has involved, at one point or another, the likes of Ernest Hemingway, James Joyce, Jack Kerouac, Allen Ginsberg, & lots more. You can learn more about the shop on their website, where you can also find some audio of their literary events:

& if you want to dig still deeper, I'd recommend Hemingway's A Moveable Feast, Sylvia Beach's Shakespeare and Company, & Jeremy Mercer's Time Was Soft There.


Posted by vintage-books.net at 3:06 PM No comments: